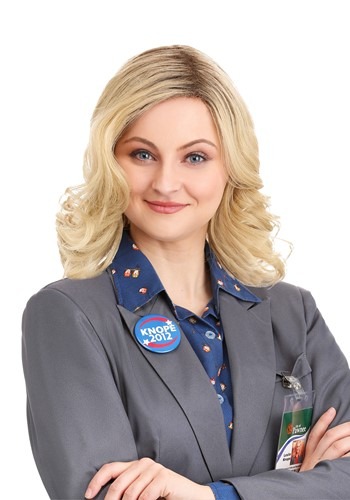 BETTER THAN THE MAYORLeslie Knope has always had her eyes keenly on the future, both for herself and the whole world,
That means she would go for City Council and even far beyond,
Too bad that distant gaze on the future sometimes causes issues in the present.If you find yourself to be much like Leslie, you might have made the mistake of going to Salvatore Manfrellotti to get a haircut and found a few minutes too late that The Mayor isn't a haircut designed for all genders! DESIGN & DETAILSHave no fear! If you're stuck with The Mayor (or any other hairstyle that just isn't suiting your Leslie Knope ambitions), we've got your back..,
er, rather, your scalp,
Our design team thinks up every possible scenario and we see you winning in 2012 (or..,
really any year) if you have this Leslie Knope wig,
It is officially licensed and billowing with beautiful blonde locks in a windswept style that only she (and now you) can pull off! SAY YES TO KNOPE!It's not at all difficult to get on board with anything Leslie wants to do,
That is mostly because of the powerhouse she is but we're sure that her power hair is part of that,
Join in the cause by shopping all of our exclusive Parks and Recreation Costumes and let's make Pawnee perfect!