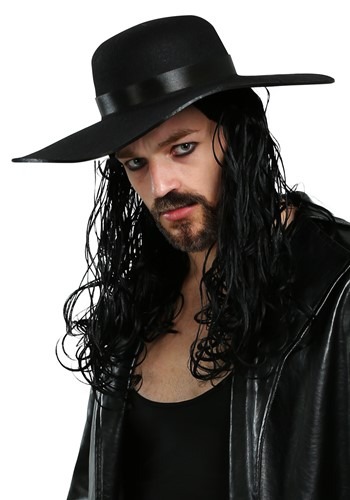 Time for a Headlock?Why did all the lights just shut off suddenly?Sudden darkness only means one thing: the Undertaker is about to enter the ring and what happens next won't be pretty,
He'll do whatever it takes to wear the Championship belt around his waist, and that means taking out whoever dares to challenge him,
With finishing moves like the Chokeslam and the Tombstone Piledriver, we're putting our money on the Undertaker to gain the Championship title,
We advise that you do too!Of course, if you can master his headlock, you might just manage to win the night... Design & DetailsWe're going to recommend, instead, you master his head locks..,
as in the mystique of the Undertaker's hairdo,
We can help with this officially licensed WWE Undertaker wig,
You'll have the complete funeral-inspired look when you wear the black shoulder-length wig,
It features the dark curls and practically wet look of victory that only the Undertaker can master. Rest in Hair-PieceCage matches, table matches, and ladder matches will all end in your favor because not many can successfully take on the pile-driving Ministry of Darkness member and come out alive,
Just remember to cross your opponent's arms in a "Rest in Peace" sign before you pin him and walk off with the Championship Belt in this curly Undertaker Wig.