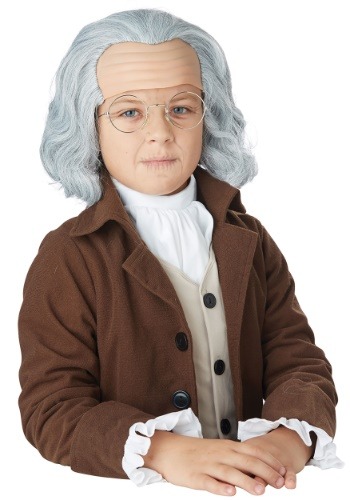 Whoa! Check out this awesome Benjamin Franklin Wig for children,
It will be the perfect finishing touch to transform your kiddo into a successful writer, scientist, and statesman,
Ole Ben Frank was all that and much more,
He was one of the founding fathers of the United States of America! He is a historical figure that helped to lay the foundation of a great and powerful nation,
If thatâ€™s not a role model, we donâ€™t know what is! Plus the guy was a fashion icon of sorts and was even able to retire at the age of 42,
Seriously, heâ€™s one of the coolest guys in history.So we are not surprised that your little one wants to dress up like him for Halloween or for that upcoming school play,
As long as you complete his colonial transformation with this Benjamin Franklin Wig, the illusion will be complete and he will bring ole Benny back to life! Just make sure he doesnâ€™t try taking your keys and his kite out during any lightening stormsâ€¦ the results may end up being a bit shocking.