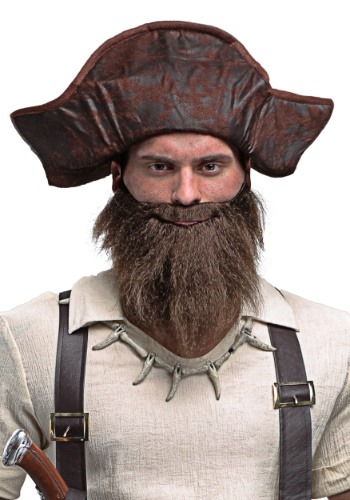 To intimidate passengers aboard ships that he was taking, Blackbeard would first fix matches to his beard and light them before boarding the ship,
That way when the infamous pirate boarded the ship all anyone could see of his face was flames and smoke,
While there's no way we're supporting anyone pulling off that trick with this beard or any other beard, that story just goes to show, being a successful pirate was all about attitude,
,
,
and facial hair,
When you're putting together your pirate ensemble remember that it's not all about striped shirts, eye patches, or even peg legs,
Pirates spent week after week on the salty sea,
It's not as if they had much water for shaving or soap and a razor for that matter,
A seasoned pirate would have to be thoroughly comfortable growing that facial hair,
So, if you aren't willing to grow your own you'd better invest in a faux beard, you don't want your mates thinking that you're some sort of landlubber.