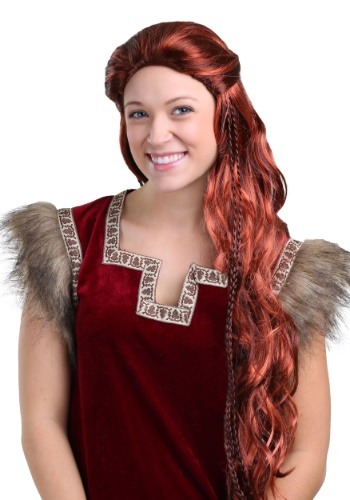 The Viking life was hard but beautiful,
The Norse lived in a harsh yet bewitching land, they farmed between fjord and mountains, in a cold climate right by the sea,
While the men were away, shipping off to trade or raid, the women took control of the farms,
It wasn't a meager task, the amount of work to do was staggering,
At night, though, the community would come together in the warmth of the fire as they wove tapestries or braided each other's hair and told the intricate legends of their people.Capture some of the romance of the Viking village when you put on this gorgeous red wig,
With a long braid and soft curls, you'd look right at home standing on the docks looking out for the returning ships,
Pair it with one of our Viking dresses and you'll almost be able to smell the salty sea,
With those long locks, someone may just mistake you for the Goddess Freyr.