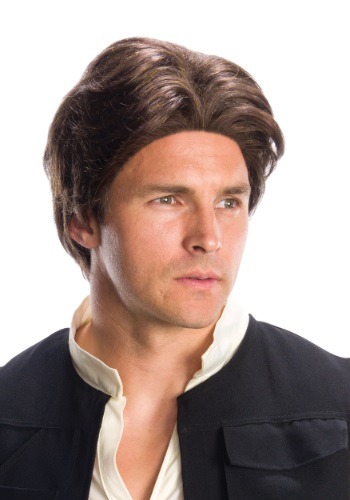 When you're the galaxy's most notorious scoundrel, you have to keep up appearances,
After all, you never know when you might bump into Jabba the Hutt or one of his cronies, so you want to cultivate the perfect scruffy-looking style,
That's a lesson Han Solo has learned pretty well, especially when it comes to his hair! His hair tells onlookers that he's a rogue, not to be trifled with,
His hair tells every patron in the Mos Eisley Cantina the he definitely shoots first, then asks questions later,
His hair is probably the reason that Princess Leia finds him so darn irresistible,
And now with this Han Solo wig, it's easy for anyone to get that look from the Star Wars movies.This Han Solo Wig brings you Harrison Ford's iconic hairstyle from the original trilogy movies,
Made from synthetic fibers, this accessory gives you a rugged smuggler style to pair with your rebel attitude, making you the irresistible rogue from the movies,
Just pair it up with our licensed costume and you'll be ready to grab Chewbacca for a rescue mission to the Death Star (provided that the pay matches the danger).