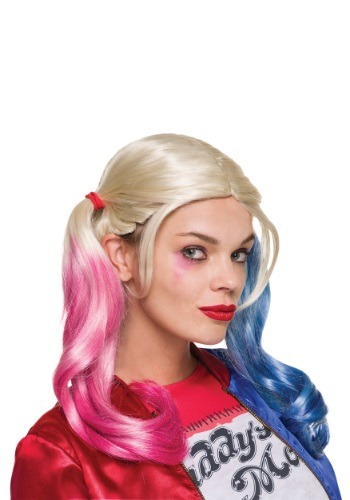 So you either have to rot in jail or be used as part of a disposable army sent on dangerous missions--with a nano bomb implanted into your neck,
If we had a nickel for every time we heard this predicament, weâ€™d be rich!While normal folks may opt for the relative security of jail and hope for time off for good behavior, you are Harley Quinn! Youâ€™ll take the thrill of adventure, thank you very much,
This synthetic Suicide Squad Adult Harley Quinn Wig is styled with a center part and two long pigtails (one red, one blue) and is designed to look just like your hair in the Suicide Squad film, which is good, because your time being locked up hasnâ€™t helped your locks,
And youâ€™re much more likely to get the Joker to come break you out of jail at the end if youâ€™re looking fresh as the psychopathic daisy that you are!