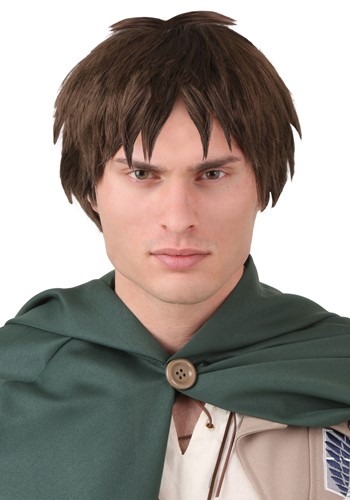 Ever hero needs some badass hair,
Han Solo, Superman, Wolverine, all of them have some seriously amazing hair that simply can't be beat,
Among these elite ranks is Eren Yaeger,
His simple part down the middle style is strangely hypnotizing,
He has a certain magnetic intensity we can't put our finger on,
Then again, it may be because he has the ability to transform into a giant, powerful Titan,
His hair basically becomes Titan hair too, where it becomes a bigger and more powerful version of the hair he has as a human.The point is, Eren Yaeger is an incredible hero, and while he's not fighting back the Titans or hanging out with Mikasa and Armin, he's probably working on maintaining that glorious mane of his,
And rightly so,
Just because you're fighting all day doesn't mean you shouldn't look good doing it,
Now you can look good doing it too, by putting on Eren's hair for yourself!Note: No guarantee you will have the power to turn into a Titan with this product,
Maybe, but probably not,